With a rich history of innovation and vision and revenues in excess of $46 billion in 2015, Lockheed Martin has been a thought leader in their industry for over 100 years.

From their humble beginnings based out of a church and a garage in the early 1900s, to their state-of-the-art facilities today, they have mastered the ability to accomplish what was once thought to be impossible. Their ongoing vision and passion for moving past hurdles is what has kept Lockheed Martin at the forefront of the global aerospace, defense, energy, information systems, space and exploration industries.

So, when it came to one of their latest operational challenges, they sought the assistance of another innovation pioneer in Pacific Corrugated Pipe. A creative leader in their industry since the 1930s, Pacific Corrugated Pipe assisted Lockheed Martin with their creative challenge on a project located at McMurdo Station in Antarctica. Challenged with a time crunch and the obvious severe elements, Lockheed Martin and Pacific Corrugated Pipe worked together to develop a literal ground- breaking solution of a culvert sleeve tunnel to launch and retrieve a robotic submarine through a 15-foot layer of ice. The robot’s primary research objectives were to understand the extent and limitations of life in sub ice environments by determining the distribution of any active biological communities under the McMurdo Ice Shelf (MIS) as well as the fundamental ice and ocean properties that make such communities viable… simple, right? 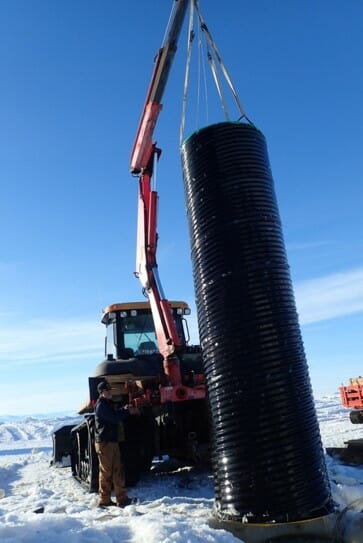 Thus, in a joint NASA-funded and National Science Foundation-supported science collaboration with Georgia Technical Institute’s Principal Investigator Britney Schmidt and Stone Aerospace, the ARTEMIS autonomous underwater vehicle (AUV) was designed and built to collect research samples and data about the ice shelf. Some of this data would characterize the interface between ice and water and melt processes beneath the MIS and be used to generate maps identifying ice thickness collected using sonar technology.

The researchers would then map the distribution of brine infiltration layers in the MIS and characterize the chemical environment of the MIS with an emphasis on the ice water surface. Finally, the ARTEMIS would map sub glacial microbial and macroscopic communicates and correlated ice characteristics. All of this was done to meet a list of objectives created prior to the projects implementation. ARTEMIS was developed to withstand the frigid waters and the depth pressures it was required to maneuver through during various missions underneath the Antarctic ice shelf. The challenge for the Lockheed Martin contractors helping to set up and operate the robot camp was to create and maintain an opening in the 15-foot ice layer for the ARTEMIS to pass through. The solution needed to provide a stable vertical opening in the ice layer and allow the ARTEMIS to travel safely and efficiently through the surface. Additionally, upon completion of the project, the area needed to appear as if it was undisturbed. 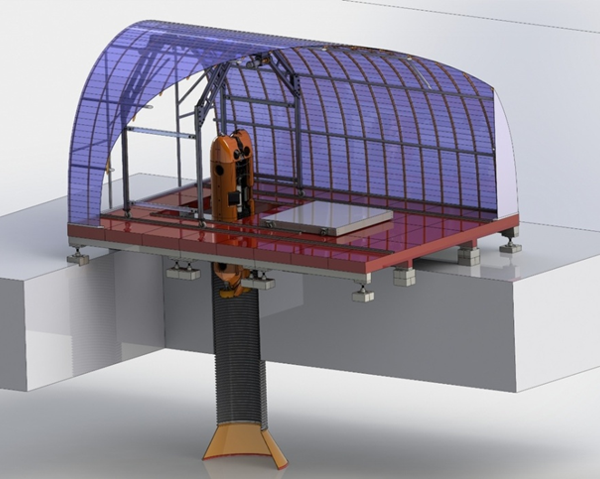 The special entry and exit to the shaft needed to allow a smooth opening for the submarine to easily advance in and out of the opening. Additionally, the area needed to take up nominal space to allow for a modestly sized cover to protect the operators from the elements and ARTEMIS. As if developing a solution to advance an AUV through the ice surface of the Antarctic wasn’t complicated enough, it was important that the solution be lightweight for ease of installation and strong to withstand the contracting pressure of the refreezing ice.

The system developed included 54-inch and 48-inch diameter corrugated metal pipes fabricated from .138-inch-thick galvanized steel with a polymeric coating. The design used was modeled off of traditional caisson sleeves to allow for an efficient vertical opening. After boring a hole through the 15-foot ice layer, machinery was used to drop the piping into the opening. A special launch and recovery system was developed and installed to either end of the caisson that allowed for quick entry and exit of the ARTEMIS AUV and the scuba divers that supported the effort. A customized hoist support system was put in place and a protective WeatherPort tent was erected to surround the entire project. The ARTEMIS AUV was flown from McChord Air Force base to the site and off loaded to the research facility. The installation was completed quickly and the exploration was ultimately deemed a success.

The strength and versatility of polymer-coated corrugated metal pipe represented a lightweight solution that enhanced ease of installation for this project. Further, once the project was completed it was a simple process to remove the culvert sleeve and allow nature to freeze the hole and leave the area undisturbed. The amalgamation of Lockheed Martin’s ongoing commitment to challenge the improbable, along with support from the creative minds at Pacific Corrugated Pipe allowed for a successful project that will bring valued research to the world.

Based upon the special merits of this project, the National Corrugated Steel Pipe Association has awarded the ARTEMIS Antarctic exploration project as their “Project of the Year” for 2016 in the category of Corrugated Steel Pipe and Pipe Arch applications. This prestigious award was voted on by a panel of independent judges comprised of four editors for national trade publications and one industry expert.