Pacific Corrugated Pipe Company was recently awarded the prestigious “Project of the Year” award by the Plastic Pipe Institute (PPI) at its 2019 annual meeting. PPI is the major national trade association representing all segments of the plastic piping industry.

Pacific Corrugated Pipe Company earned this award over several other companies from throughout the country. Our winning project started with many challenges, from the location of the project itself to the material conversion required to optimize the project, the hurdles were numerous. First, the project was in a mountainous area on the remote island of Kodiak, Alaska. The second challenge was that this unique project started out with a concrete specification. So, Pacific Corrugated value engineered a solution to converted this over to a StormTite®corrugated HDPE pipe solution. 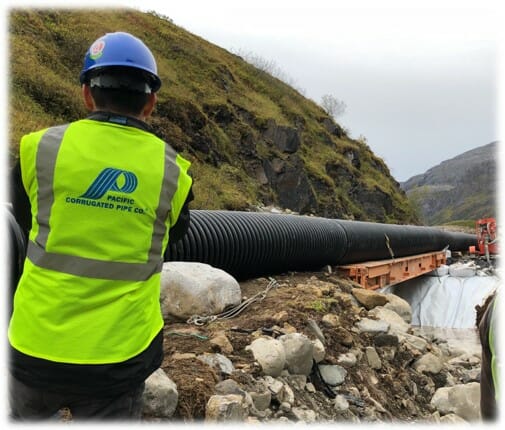 Due to the remote location of this project, the large construction company in charge of the installation proposed Pacific Corrugated Pipe Company’s StormTite® HDPE pipe solution to the design engineer firm. After a comprehensive review of the proposed plan, the firm quickly approved the HDPE solution for use throughout the project. In addition to meeting all the engineering challenges, this plastic pipe alternative drove substantial savings, relaxed logistics and drove other benefits to this project. The use of HDPE plastic pipe reduced the carbon foot print through a sensitive Alaska terrane by using less storage space to ship from the mainland and by using smaller, lighter trucks and trailer equipment to haul to the remote site. The StormTite® plastic pipe material was lighter and easier to maneuver with multi-diameter nested bundles for the contractor, resulting is less project challenges, less cost and an on-time completion date.

While the alternative solution was quite impressive so was the project itself. The primary purpose of the project was to capture and divert streams containing runoff from snow melt in the Upper Valleys of Kodiak Island. These streams historically emptied into the ocean, away from a Hydropower-generating Terror Lake reservoir. So, various sizes of the StormTite® pipe were used to divert these snow runoff streams back towards the power plant. Teams, operating bore machines, bore from the lake and Upper Valleys to create a diversion tunnel to the lake. These streams now pass through this 1.2-mile tunnel from the Upper Valleys, then under the Island’s National Wildlife Refuge and into the reservoir. 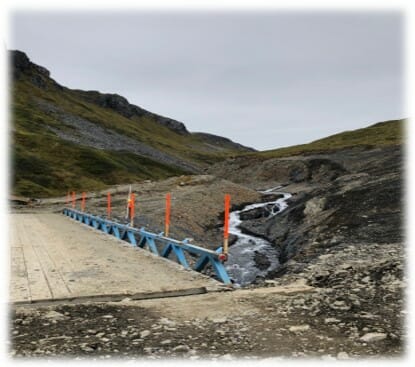 The challenges didn’t stop there, one in particular required the need to create an upper opening of the tunnel and dam. These openings were established using shotcrete to stabilize the hillside and to target for drilling through the mountain to the lake. Further, infrastructure support was established by using the StormTite® corrugated plastic pipe, which was used as a temporary creek diversion. After diverting the water to its new location, this same StormTite® pipe was dismantled and reassembled permanently in a different area of the project. Ultimately, almost 5,000 lineal feet of HDPE corrugated pipe was used to complete the diversion. Also, various diameters of pipe and flared end sections were used to create cross drains while road building to the dam and tunnel locations. Final installation of HDPE pipe connected a dam in the Upper Valley to a second stream and then tunneled to the lake on the other side of the valley. The additional water flow meaningfully increased the Hydropower-generated electricity to the surrounding population. 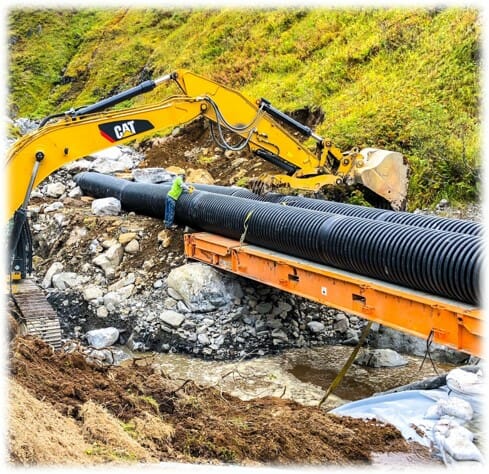 The construction project manager on site said, “The temporary diversions we built with your HDPE pipe could not have been accomplished with concrete pipe, saving us a huge amount of set up time, constructing and getting us on to the next phase of the project”. The final results of the added water flow will increase the amount of annual hydro-power production generated at the existing facility by an additional 33,000 kilowatt-hours of generation per year, which will add about 25 percent more energy to the facility. The additional hydro-power production will go into the existing electric associations grid for the direct benefit of all association members. The Terror Lake Hydroelectric facility is the primary source of the associations energy supply and is the cornerstone to their renewable wind-hydro energy generation system, with the vision of making Kodiak Island 98 percent energy efficient, while being disconnected from the North American grid. Finally, an estimated reduction of a $1.3 million-dollar annual savings in diesel generation and an estimated reduction of 140 tons of NOx and 6500 tons of greenhouse gas released into the atmosphere were realized.

The people in the surrounding Kodiak, Alaska area benefited from the decrease in cost; reduced environmental impact and an increase in generated kilo-watt hours. TJ Leason- CEO at Pacific Corrugated Pipe Company said, “When a project this important is managed and implemented this well, we felt it deserved some recognition. We are proud and humbled that PPI agreed with our assessment and awarded us as this year’s ‘Project of the Year’ recipient”. Implementing this HDPE plastic pipe solution ultimately drove very meaningful outcomes that not only impacted a community but also had a beneficial impression on our environment. Overall, it was managed well by all participants… truly a terrific team effort by everyone involved.